At the 2014 Agape Spring Benefit, Rickey Waddell was awarded the 2014 Agape Scholarship Award. In his acceptance speech, Rickey recounted that his mother learned about Agape, “when we wer 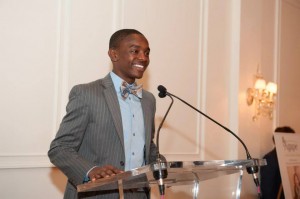 e having a hard time when we first moved to Hollywood Road. We didn’t know what to do, so my mom’s friend recommended we contact Agape. She told my mom how helpful and how determined Agape was to provide guidance in the community. I then enrolled in the Agape Community Center and I can truly say my life changed for the better.”

Eight years later, Rickey stood before us at the Spring Benefit as an award winning senior at North Atlanta High School who was recently granted a full scholarship to Bard College in New York by the Posse Foundation. Read the heartfelt speech that Rickey gave at the Spring Benefit: Rickey Waddell’s Speech 2014